Have you ever been left with a huge emptiness in your heart by something small?

Chilly, our quaker parrot, arrived at our home almost seven years ago. She brought her companion, Willy, with her. They were both quirky and noisy, much different from the parrot that had flown away a few months before (he loved whistling to Led Zeppelin, The Jackson 5 and tango music, to say the least). I wasn’t sure I would grow close to both… I mean, they didn’t do much else than generate noise all day, so much that I couldn’t listen to my own thoughts most of the time. I pretty much fed them robotically every day, cleaned their cage and went on with my day, still grieving my previous loss.

Willy didn’t survive the Winter. I found him one day lying on the bottom of the cage with a shocked Chilly watching over him. I buried him a bit later, she stayed mad at me for a few days and I tried to avoid her as much as I could so I would not irritate her more.

I feared Chilly would get depressed and figured that maybe she needed a new place to stay but… one day, while the Mr. was cleaning her cage, she got out and flew around the patio. Up until that point she had spent her life in it.

I was a bit scared that the cats might attack her, but they never did. Slowly she became friends with them, followed them around the patio keeping a watchful eye on their every move. 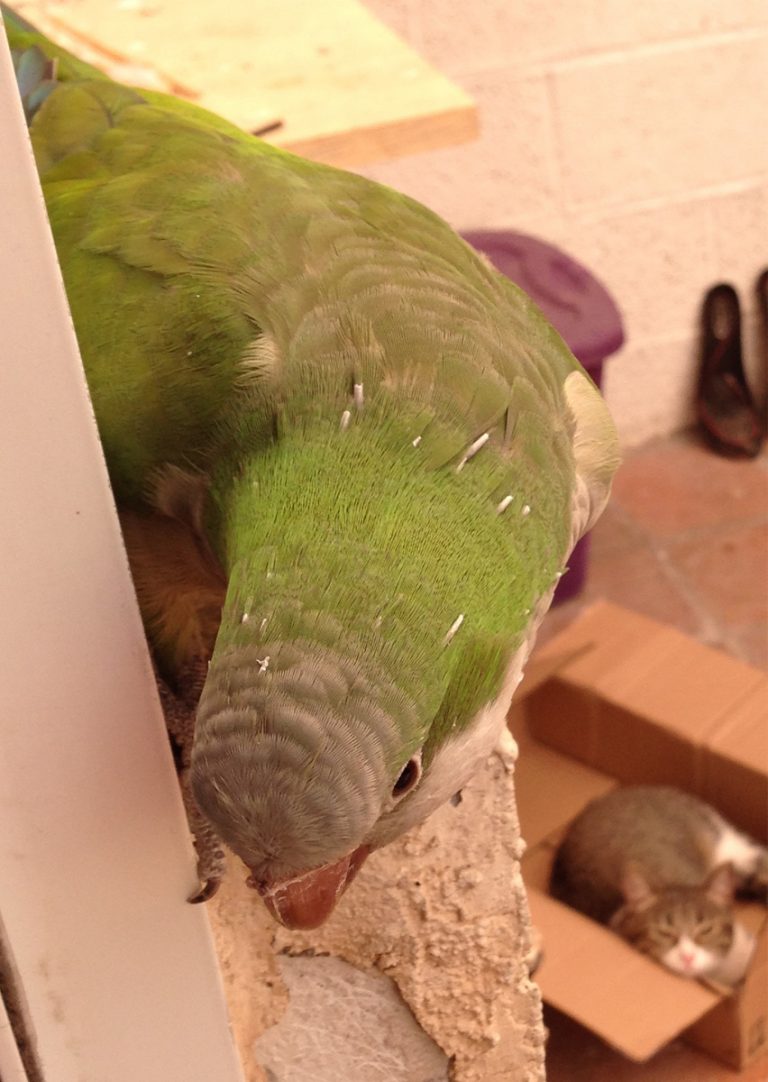 Chilly became close to Maya, the littlest cat we rescued. She would watch over her while she slept in her many boxes, would come to her defence when there was a cat fight on the horizon. She was fearless.

She even stayed friends with Morgan, our one-eyed cat, after he scratched her close to the eye while she was trying to steal his dry food.

We lost Chilly yesterday. Her death was too long for her not to have suffered, yet too short for us to get her help. She didn’t deserve to go through the pain, not after filling our lives with laughter and good company.

I hope that she was happy during her short-lived life, that she enjoyed the freedom we could give her.

Today is unusually quiet around here. Maya has spent some time next to where her cage used to be, crying at the space that is left. I hope she’ll be able to move on when her time is right, I also hope that the cats she’s closest to will help her with her grief.

Her absence will be tough on all of us.

Things I will not forget about Chilly:

– The way she laughed when she got a new corn cob.
– The time she would take to insert sushi sticks into her cage, covering all of it to get some privacy. She was a true architect.
– Her courageously flying between two fighting cats just to scare them away and how she always stole their croquettes when the cats were distracted.
– How she always got excited for her bath.
– Her patiently waiting on the window sill outside while I got her a slice of cucumber.
– Her nodding no matter what you were telling here.
– Her wise commentary on every conversation.

Rest in peace, little feathered one.

A black and yellow scarf

Don’t plan the next decade, do this instead.

7 Ways You Can Reduce Waste Now

Why failure is a wonderful motivator

Why I make handmade dolls